Hello everyone; sorry for the long-time-no-update. I was in Chile for most of the time leading up to Mom's and Mike's arrival in Coyhaique, to the south mostly, camping and 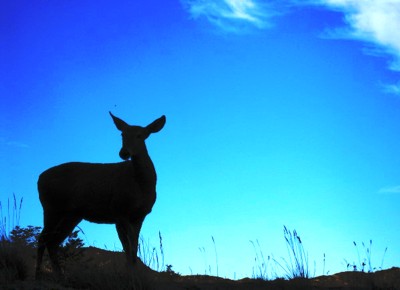 fishing rivers that I don't even know the names of.  During this time I also saw my first huemul deer, and got some great pictures, such as this one. When I got up to Coyhaique and went to the hotel where I was to meet Mom and Mike and walked in to the reception area with my backpack and my filth the owner tried very hard to convince me that I was in the wrong place. I assured her that I was quite certain that I had a reservation, and that if she would just check the book she would find either my name or mother's, but she just kept saying, "There is a backpacker's hostel just down the road."  Eventually we got it worked out. Mom and Mike arrived that afternoon, and we had a nice reunion and then dinner in town. 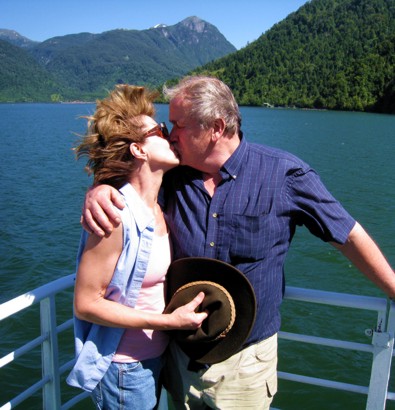 The next morning we took a bus to the port where we boarded a ship that took us out to the Puyuhuapi Resort. The passage was a lot of fun; we were joined for part of it by a pod of dolphins and the scenery was incredible. The passages are as much as four thousand feet deep only a few feet from shore, and the mountains rise right out of the sea. At the resort we were wined and dined and guided and generally coddled for the next four days. Between massages at the spa and dips in the thermal pools we also did some kayaking and fishing, 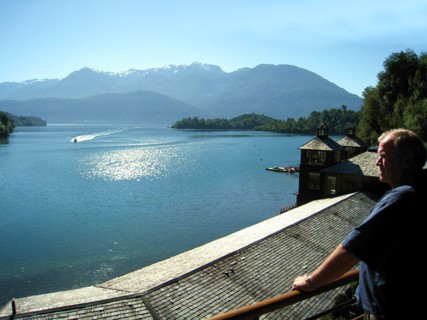 and had dinner with a really nice American couple who have been cruising on their Block Island 40, the Misty Dawn, for the last 11 years. Mike and I went fly-fishing on one of the nearby rivers. Poor Mike got skunked; I caught three trout and lost an enormous salmon right at my feet after a ten-minute battle.

Overall Puyuhuapi was an incredible experience, not likely to repeat itself anytime soon. Mike had some funny moments in the dining room though; here you can see his reaction 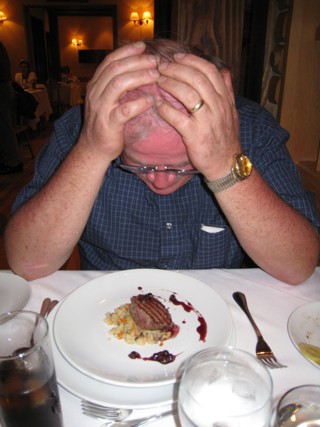 to the size of the steak he was served one night.  Now we are at the Minchos Lodge on the outskirts of Coyhaique, and Mike and I will be headed out this morning to try and get into some fish in a nearby river. I hope everyone back home is doing well and not freezing; be good.