Well they finally did it; they killed my *%7$&#+# tent.  Big Lebowski fans will recognize the root of this line, but at the moment it is not so funny to me.  This morning my tent was smashed to smithereens beneath a very, very large tree. Luckily I was not occupying it at the time. This, however, was unknown to the impromptu rescue squad that formed at the scene, and when I came walking up and discovered them they were frantically trying to remove the debris and recover my body. The tent is toast - poles bent and snapped; the roof and storm tarp sporting huge rips and holes. What next? The episode caused a minor uproar in the tiny town I am in, as it occurred at the municipal campsite, which apparently has no form of insurance. Once the initial drama quieted down and the crowd dispersed I was sorting through the wreckage when a contingency of the local municipality showed up and ushered me into an office for a sit down. It was weird. The whole thing was being taken so seriously. It was like they expected me to flip out and sue the town for everything it had. We kind of stared at each other across the table for a while, and then they started offering me lodging and telling me they would have to call a meeting to figure out how to replace my tent and so on. I eventually just had to interrupt them to tell them that they had nothing to worry about, that I considered windfall trees to be an act of God, and that I would figure out what to do next on my own. Their relief was palpable. They still offered me a free cabin, which I may take them up on, and told me too boot that I can stay in the camping in the future for free for as long as I want. Ha! I must admit though that the emotional impact of this event has been more than I expected. That tent has been my home for the last four and a half months, and, despite all of the zipper trouble I have had with it, it has been a good home.  Silly as it may sound, it feels a little bit like when our house burned down when I was a kid. Oh well. 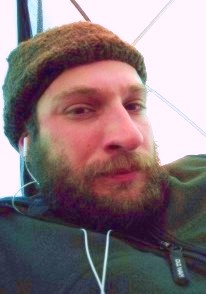 In other news you will notice from the before and after pictures that I have joined the classy big-boy fly fishermen and gone "barba-less" with the new clean-shaven flyfishing Justin action figure (you will pretty much have to be a Spanish-speaking fly fisherman to get this joke so who knows why I made it). With the onset of winter and the necessity of a great deal more gore-tex and protective clothing usage I found that the beard kept getting caught in zippers, which is not fun, and eventually just said to heck with it and used the razor that I have been carrying around since I left Atlanta. Unfortunately now the wind bites a bit harder when it can get at me but, well, you just can't have the best of both worlds and I was starting to look pretty darn

scruffy anyway. Another piece of good news is that just yesterday I was given a book which has kept me distracted from thoughts of the tent for the last several hours. It is The Motorcycle Diaries, Che Guevara's notes from the motorcycle trip that he and his friend took across South America in 1951-52. I can hear you all groaning from here. As sick as I have been of goofy American teenagers and their silly Che T-shirts and revolutionary enthusiasm, in the end what this comes down to is that the man was an incredible writer, and this book is fascinating. When the recently produced movie came out I watched it with the Syzygy group and Rishi's soon-to-be wife Jioti in the basement theater at the Patel's house.

Though it was admittedly a well produced film I really didn't think too much of it. I hadn't realized then that it was based on Guevara's actual diaries, and even if I had, I probably would not have taken an interest. But here in Patagonia books are few and far between. When this one was offered I took it without hesitation, and now I am very glad that I did. The introductions and other additions to the text are the usual political propaganda, but Che's portrayal of the journey and the obstacles and people that they encountered is both fascinating and exceptionally well delivered, and in my current circumstances it is something I can relate to very easily. I highly recommend it to anyone who is enjoying this blog. So off I go, the pack a bit lighter until I figure out what to do about the tent. For the readers' reference I will list here the sum total of the items I am carrying on this trip that have NOT been stolen, broken, destroyed, repaired, or replaced as yet: 1. My Buck Knife 2. My Hat So if anyone is out there planning a similar trip and looking for good durable goods that they can depend on, those are they. Via con Dios amigos.